In the Spotlight: Gefion Insurance

The Danish motor insurer is latest to require remedial action by regulator Finanstilsynet after deficiencies were identified in its capital and risk management practices. David Walker reports

Gefion Insurance has become the second Danish insurer to hit headlines after its regulator intervened in its solvency calculations and risk management practices.

First came Alpha Insurance, last year, whose bankruptcy was linked to the liquidation in March of one of its counterparties, CBL Insurance Limited.

It moved to restore its capital position, but a subsequent inspection by its regulator, Finanstilsynet (FSA), identified deficiencies that prompted a ban on Gefion expanding its business and the imposition of a capital add-on of DKK 39.2m ($5.89m).

The FSA assessment, reported on 11 July, said Gefion did not have the necessary control of its outsourced claims managers, and the company did not have a sufficiently effective compliance, risk management and internal audit function (see box, below).

Gefion is appealing the decision to impose a capital add-on, which had the effect of dragging its 31 May solvency ratio down to 86% from 105%.

Gefion is not alone in falling below 100% coverage in 2018. Analysis by Insurance Risk Data of 1,220 solo entities' data shows five other insurers in the same position. A further 16 have ratios below 110%.

Gefion said in its year-end solvency and financial condition report (SFCR) for 2018 that its managers were acting to restore the ratio to sufficiency. Taking out extra reinsurance was one remedial measure cited.

The SFCRs are published in the second quarter of the year.

The FSA had previously said in June 2019 the company may not take capital benefit from any loss-absorbing ability of deferred taxes, and so required Gefion to restate financial reports for 1H1 2018 and FY 2017.

Gefion had hoped that various remedial measures it took to restore the capital coverage, to 130%, would be enough.

But the FSA's June ruling triggered a revaluation, and a new solvency coverage ratio of just 105% was calculated, on 31 May 2019.

Gefion disagreed with the FSA's ruling on deferred taxes, and said in a statement: "This is based on the assessment that Gefion Insurance will not be able to re-establish the company's own funds quickly enough after an immediate occurrence of a hypothetical 200-year event when Gefion Insurance would lose its entire capital."

The company said "it will be possible for the company to raise sufficient capital and the company will therefore be able to continue to do business even in a hypothetical 200-year event." It pointed to having raised €12.3m ($13.8m) between April 2018 and May 2019. "Furthermore Gefion Insurance is still in ongoing discussions about further capital increases," it said.

"However, in the current situation, it has not been possible to convince the [regulator] of this and Gefion Insurance has therefore chosen to take note of the order, even though Gefion Insurance is still of the opinion that it – in line with other insurance companies – has had no reason to change its practice due to a lack of common European guidelines in the area."

The company noted in its 2018 SFCR it had received a DKK 39.6m capital injection in May 2019. The firm also took on an "external capital advisor... with the purpose of obtaining increased efficiency of capital management," and said it was speaking with institutional investors about further boosting its capital base "before the end of 2019". 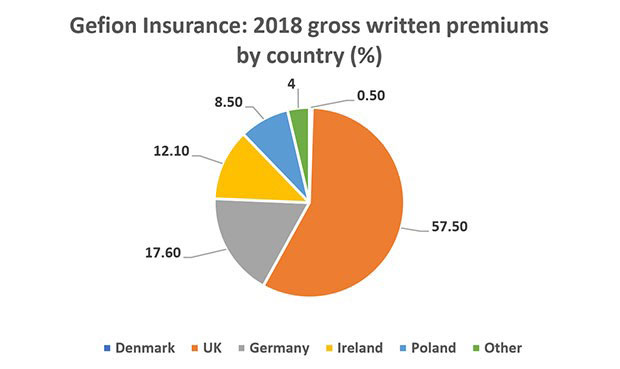 The insurer spoke of Brexit-related risks, but added it had entered the Temporary Permissions Regime so it could keep doing UK business even in a hard-Brexit scenario. A separate team at Gefion is working a third-country branch application.

In 2018, the UK was the company's only major sphere of business producing a positive technical result. (In 2017, the UK produced a losing technical result of DKK 927,000. Denmark and Germany also registered losses.) 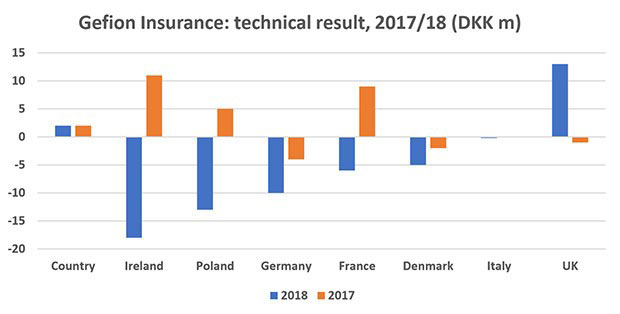 Of 2019, Gefion said it expects "a year of consolidation, with no growth and a stable or slightly declining premium volume, both gross and net of reinsurance, and a strong focus on profitability and cost saving initiatives".

Most of Gefion's GWP is in motor lines. 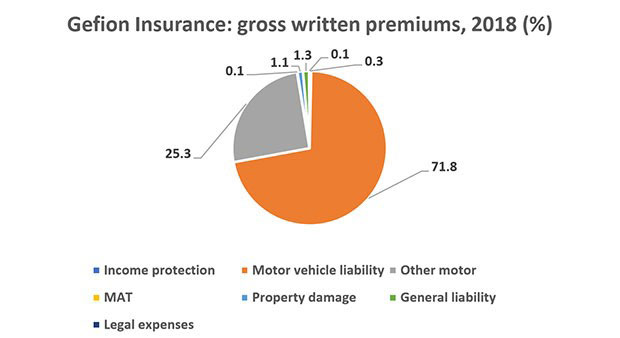 Commensurately, the bulk of its technical provisions are also in those lines. 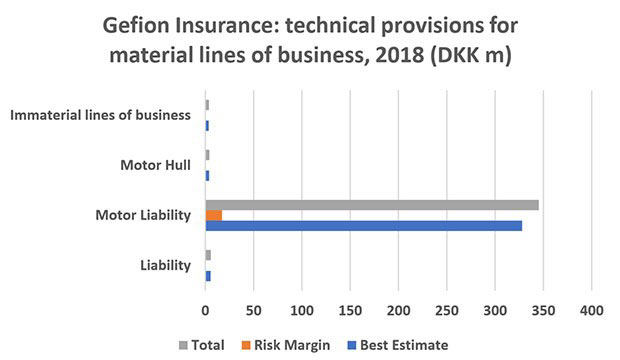 Under Danish law, Gefion was required to establish an audit committee in 2018 – for work previous done by its board of directors – and it noted the committee would "serve as an independent monitor of the organisation's financial reporting processes, risk management activities, systems of internal control and financial compliance".

At the end of 2018 Gefion said its board was planning to restructure the internal audit function this year "including additional internal and external resources".

"2018 has been spent further revising and strengthening the structure and reporting of the governance committees," its 2018 SFCR said.

Extra resources for actuarial, claims handling, compliance and underwriting "will enable Gefion Insurance to improve profitability and governance as well as focus even stronger on the customer experience by providing a strong foundation for the monitoring and management of its coverholders and third-party administrators," the company's 2018 SFCR said.

Gefion said in a statement on its website: "We will continue to operate Gefion Insurance as a well-run and healthy company. A company that is a good business partner and a credible player in the insurance market of many European countries across borders.

"Thus, Gefion Insurance will continue to challenge the national markets and ensure a much-needed competition in the insurance market for the benefit of the consumers."

Deficiencies identified by the FSA inspection

The above charts and data are supplied by Insurance Risk Data, a database that combines European insurers' financial and regulatory filings, including the Solvency II SFCR disclosures and QRT data, into a single, comprehensive and user-friendly database. It is ideal for market/peer/prospect analysis, research and benchmarking. To find out more about Insurance Risk Data, please email [email protected]

US insurers in Covid-19 coverage crisis

IFoA brings disciplinary action against two of its biggest critics

"Responsible underwriting will become the norm"