Chief risk officers discuss the role they have played in establishing net-zero commitments, climate scenario testing and how they are incorporating climate risk into modelling, in this InsuranceERM roundtable

Maeve Sherry: We worked collaboratively with the team accountable for defining our ambition to reach net zero by 2040. To a large extent, we were doing our traditional risk role: challenging the feasibility and demonstrating we could deliver it with credibility. We also used the skills we have been building in the climate project to support the choice of metrics, and ensuring it all came together coherently. At the end, a formal risk opinion was delivered to the board.

"As for the reputational risk, I tend to think about it like wildebeest in a herd"

Alex Duncan: I sat with two hats on – sustainability leadership and risk management – and had to propose targets to the executive. For Scope 1 and 2 emissions, we found it relatively straightforward in terms of target setting and risk assessment. Scope 3 emissions was a different story: not just because they're hard to measure, but also because you depend on so many external factors.

As for the reputational risk, I tend to think about it like wildebeest in a herd: you don't want to be at the back because the lions will get you; but if you're at the front, you might be expending too much energy.

Christopher Cundy: Have you developed climate risk appetite statements? What do they look like?

Maeve Sherry: Climate is integrated into our existing risk appetite framework. We have a climate risk preference: it's a qualitative statement that we've broken down into physical, transitional and liability risk. We have also defined targets, thresholds and operating limits as part of our climate risk appetite.

Alex Duncan: We start the same way, with a qualitative statement at the top, and then we have a junction to our reputational risk statement. Then it's cascaded through our usual risk appetite and so it 'disappears' into market risk, credit risk, etc.

Christopher Cundy: Do we understand climate change risks sufficiently to be able to incorporate them into modelling?

Christian Dahmen: We are starting to do so, but it is hard to transfer the knowledge acquired in climate modelling into actuarial and capital modelling. One of the key problems seems to be that papers on climate research focus on 20, 30, 40 years, which is the timescale at which you can see the effects of global warming. But that timescale is very different from the one-year view we take in non-life risk modelling. In my view there is still work to be done to translate these multi-decade results into a realistic one-year-risk view.

Another problem is that the models we use in risk management still heavily rely on historical data: we look into the past and try to infer future loss frequencies and intensities from data of past decades. That's no longer valid as past data will not be a good proxy for the future because of the well-known impact of climate change. What should help, however, is the progress made in the 'attribution science'.

Christopher Cundy: What do you mean by 'attribution science'?

Christian Dahman: Attribution science aims at answering whether extreme events in a specific region have become more – or less – likely compared to a world without climate change. By this, it can give vital input for adjusting the statistical models to capture climate-related effects and separate these from other factors, such as socio-economic, that drive loss experiences.

Alex Duncan: Just Group has quite a big portfolio of lifetime mortgages, which have 40 to 50 years' potential duration, so one-year risk modelling doesn't do the job.

"If you're starting to put climate projections and government actions that have a high degree of uncertainty into your modelling, you could be presenting a false science"

But we have no real confidence in how the future are going to play out, longer term, as there is huge uncertainty around how things might transpire. For property portfolios, you could have one assumption that all the government's flood prevention plans happen, and another assumption that none will happen. The numbers you get will be so wide: then what do you do with that information? This is a real challenge.

Transition risk is also very difficult to assess. It is so dependent on the behaviours of others, and regulatory or governmental intervention, that it's almost un-modellable. You have to change tactics and go for scenario analysis.

Maeve Sherry: In our TCFD report we describe our climate value-at-risk measure, but so far we have not put numbers around it because of the level of implied uncertainty. But it's helpful to at least get comfortable with the assumptions underpinning the model, so the narrative that accompanies any scenario analysis is informed and can generate a useful conversation – and help understand what kind of triggers might prompt a management action. 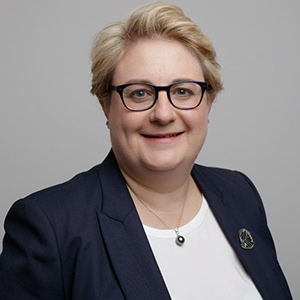 Eugenie Molyneux: Insurers like to model, but in this situation we may be better off saying today's experience is the closest experience we have for the future – and then run scenarios. If you're starting to put climate projections and government actions that have a high degree of uncertainty into your modelling, you could be presenting a false science.

Alex Duncan: I think you're bang on. We have a tendency to anchor on models as some sort of truth. Models are far from that; they are tools to help you have a good discussion about the future. One of the consequences of this un-modellable uncertainty is we're likely to see people take very different risk positions in the future.

Paul Barrett: There are a number of models which we need to continue to evaluate. We know tomorrow is not going to be like today, and in a lot of areas we can make some reasonably educated guesses about the direction of change. The next level of maturity is thinking about orders of magnitude and how significant it is for our business, and finally you can talk about quantification. How we underwrite in five or 10 years' time is likely to iterate quite a bit from where we are today, and the priority is avoiding any cliff edges.

Christian Dahmen: As important as it is to come up with a framework to estimate your emissions and your footprint with great accuracy, often it is obvious which areas of the business are most carbon-intensive. Hence, I would rather start the dialogue with the business on immediate measures sooner rather than later, even if the emission quantification may not be entirely spot-on yet.

Christopher Cundy: Is scenario testing for climate change harder than for other risks?

Eugenie Molyneux: Generally yes, and it's far more difficult for transition risk than physical risk. When we began, a few years back, we started at a broad level; it was almost a macroeconomic scenario. Over time, we've found that in order to do something meaningful – especially for transition risk – you have to make the scenarios far more specific, otherwise the scenarios don't generate enough insights. So we develop specific scenarios and then we can combine them in different ways.

Eugenie Molyneux: ...even sometimes customers. Large corporates want help. The more we can make our customers aware of the impact, the more it helps them primarily, and us secondarily, in terms of the sustainability of our businesses.

Christopher Cundy: How many scenarios do you look at?

Maeve Sherry: One of the surveys we responded to recently asked which scenarios we consider as part of our climate modelling, and offered a very long list of options. We responded with maybe 10-15 of those listed. I expect there will be some rationalisation over time as firms converge on scenarios that are widely accepted and come with a narrative that stakeholders can get their heads around.

Alex Duncan: We look at three scenarios, based on the NGFS [Network for Greening the Financial System] set: a path to global carbon neutrality in 2050; a divergent path with rapid fossil fuel phase-out and high costs; and one that is Paris Nationally Determined Contributions. Then we look at it through different lenses i.e. what does it mean for our physical property, commercial real estate portfolio, business operations risk profile etc.

Paul Barrett: The UK's CBES [Climate Biennial Exploratory Scenario] exercise was helpful in terms of simplifying the scenarios into early policy actions, late policy actions and no additional policy actions. Most of your high-level scenarios are going to be some kind of formulation of that. I was also pleased to see the focus on liability risk in the CBES. Liability risk is a really big area and development is very patchy; people may get caught out as there are definitely big emerging risks there.

Christopher Cundy: How good are we at understanding the climate risk in our investment portfolios?

Alex Duncan: We are coming at it from two directions. One is a fundamental credit perspective, where we have integrated our ESG assessments into our credit assessments overall. The other way is 'top down', trying to find numbers that give a representation of an asset's carbon footprint. There are lots of data providers now who will be able to score the bulk of the listed assets.

Christopher Cundy: Will we end up trying to do the same for our underwriting portfolios?

Eugenie Molyneux: Yes, we have been, and are, working on it, but it is very challenging. Customers are not necessarily publishing the information that is needed. We could ask for that information through the underwriting process, but it's a challenging landscape at the moment; and it will take time.

Maeve Sherry: The industry is not quite there with a robust methodology and consistent data. In the meantime, what we can be clear about is where we will do business, where we won't do business, or what sort of engagement we are prepared to pursue with investee companies. On the underwriting side, we can also engage with clients about our net-zero ambitions and support them in managing their climate-related risks.

Christopher Cundy: What information will reinsurers be asking for from insurers?

Christian Dahmen: To quantify the carbon footprint of the whole underwriting portfolio will imply a massive data exchange: let's start with a single quota share treaty on a motor book. To calculate the associated carbon footprint accurately you will rely on very good and detailed input (mileage, type and size of engine) from your cedant. Now your portfolio will consist of thousands of treaties with motor being a rather simple line of business in this respect. Then add on top that each cedant is likely to provide their input in varying data formats.

In view of how huge and "assumption-prone" that quantification effort would be, it seems appropriate to start the dialogue about the well-known carbon-intensive areas such as coal in parallel.

Ultimately, it's about starting to do the right thing now rather than setting up a big project to aggregate the one "true" figure of the current footprint as its sole priority.

Part 1 of this roundtable can be read here.