Displaying solvency ratios correctly has proved the biggest challenge for insurers in their Solvency II public reporting this year, according to analysis of the documents by Insurance Risk Data.

The data service conducted in-depth analysis of quantitative reporting templates (QRTs) where its quality assurance checks had identified issues with figures, or legibility.

In most cases (68%) the faults occurred in what stakeholders and regulators would view as the most crucial figures – the solvency and minimum capital ratios.

In nearly one-third of cases where Insurance Risk Data found mistakes in published data (32.5%) it was ratios being wholly absent from the Own Funds templates, marked down wrongly as 'zero'. In a further 37% of the cases, these metrics were given as integers without any decimal places.

The problems were spread across 20 of the 32 countries that adhere to Solvency II's reporting demands – including errors from at least one insurer in each of the 10 largest underwriting industries in the EEA – suggesting the depth of a market does not necessarily ensure accurate reporting. 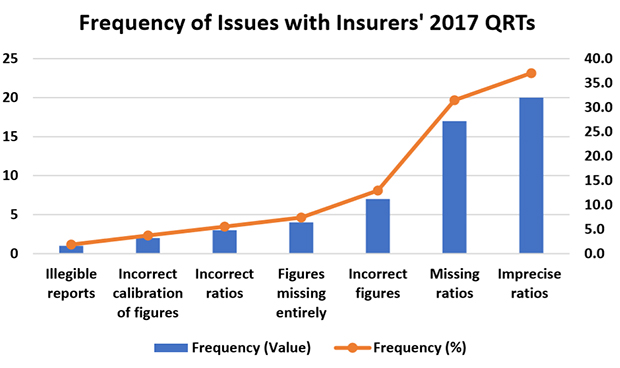 Phil Manley, Insurance Risk Data's operations director, said: "For some insurers, just one decimal place in a ratio can translate to millions of euros of either capital requirement, or of eligible own funds to cover it, so high precision and accuracy in reporting are important for the insurer, for the readers of its reports and of course for services such as Insurance Risk Data."

Insurance Risk Data extensive automated and manual checking of data on the 2017 reports is ongoing, so it may yet identify further errors in the QRTs.

The Solvency II regulation includes 38 QRTs with a combined 1,962 cells, although not every insurer has to complete all 38. Some national regulators impose additional reporting requirements.

Manley said Insurance Risk Data contacted all the insurers in question to request clarification of their figures, and commonly had received the corrected numbers by return mail. In most cases, the companies in question also republished their solvency and financial condition reports (SFCRs) in which QRTs are often appended.

He said that while the vast majority of insurers had done a good job in ensuring the templates were completed to a high standard, a minority took a surprisingly lax approach to both presentation and data quality in their SFCR that reflected badly on their brand.

"Some insurers need to wake up to the fact that the SFCR is more than simply a tick-box regulatory filing. It's an increasingly important public document which, like an annual report, also serves an important marketing and PR function.

"The production of the SFCR can be a significant burden for an insurer and the occasional minor error is inevitable. However, there is little excuse for SFCRs so poorly produced that they are illegible or simply don't add up, giving a negative impression of the insurer's regard for their policyholders and investors alike.

"At Insurance Risk Data we aim to be part of the solution by highlighting such errors to insurers and regulators, providing visibility and benchmarking services to the industry to encourage best practice."

Inaccuracies or incomplete figures were noted - and since being informed, largely corrected - from entities of Allianz, Axa, Credit Agricole Assurances, Bupa and Triglav, to name a few.

Insurers reacted in different manners on being informed.

Holger Brendel, head of communications for Germany's HUK-Coburg, replied promptly with updated figures and noted these were to be found correct in the relevant chapter of the group's narrative report.

Jan Sinnige, corporate affairs spokesman for Coöperatie VGZ, thanked Insurance Risk Data's "awareness" and provided the requested figures, adding: "We will make sure this will be corrected on our website soon".

One large UK insurer in its reply did not provide solvency ratios accurate to two decimal places, but noted the relevant eligible funds volume, the minimum and solvency capital requirements, and the mathematical method to generate the required ratios from these.

The head of investor relations at one German underwriter, responded that the unit Insurance Risk Data had asked about had since been sold on, "and the figures we published were subject to intense quality checks, so I'm quite sure they are correct".

A spokesperson from the European Insurance and Occupational Pensions Authority said Eiopa had given guidance on the "supervisory expectations for the SFCR content" insurers should consider when planning their 2017 documents.

In its review of the 2016 SFCR submissions, published towards the end of last year, Eiopa pointed to five key areas it wanted to see improvement.

Eiopa said it received the public pillar 3 documents that had been both collected and "validated" by the national regulators, but that Eiopa would perform extra "data quality checks" to identify any issues. "To continuously improve data quality, Eiopa is closely collaborating with the national supervisory authorities," the spokesperson said.

Get your free listing in InsuranceERM's 2022-23 technology guide

The US Climate Survey: good, bad and ugly

Ukrainian insurance market "on the verge of a huge crisis"

IAIS 2022: bringing the party back to insurance

Blockchain in insurance: surviving the wreckage